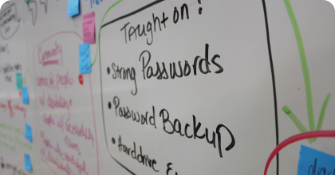 Communities of security trainers around the globe are uniquely positioned to bridge high-risk civil society groups and tool developers. Trainers have extensive knowledge surrounding the threats faced by their communities, the risks they take, and the challenges they have with specific tools. Through a series of regional workshops, USABLE enhanced digital security trainers’ ability to integrate feedback collection activities within their existing trainings, while building up their capacity to communicate directly with tool developers about specific usability roadblocks hindering the adoption of important security practices.

Following the regional workshops, trainers put what they learned into practice, implementing Tool Feedback Sessions during their trainings and sharing this feedback with developers. By formalizing and expanding feedback collection, USABLE benefits at-risk users, trainers, and the open source developer community. Developers receive improved, higher-quality, and prioritized feature and tool modification requests, trainers have a direct path to improve the tools they train on, and voices of vulnerable populations are amplified. The result is more security and privacy tools that are easy-to-use for those who need them most.

To date, USABLE has reached more than 400 end-users, jump-starting an important feedback loop that was previously missing.

In parallel, USABLE provided direct support to open source developer teams through two rounds of the UX Fund support, which offers targeted small grants for user-driven usability and accessibility improvements for open source digital security and privacy tools. As trainers continue to share collected feedback with developers, they not only improve developers’ understanding of their users, but also allow developers to capture and implement tool changes that result in more user-friendly and useful products.

In 2018, the USABLE project hosted its second UXForum, a multi-day event that brought together key communities including human rights groups, trainers, open source and private sector developers, and design experts to continue devising ways to scale and sustain these feedback loops.