The Guardian Project is a global collective of software developers, designers, advocates, activists, and trainers who develop open source mobile security software and operating system enhancements. Orbot is a free software Proxy server project which allows Android users anonymity on the Internet. Orbot uses Tor to encrypt internet traffic and empowers other apps to use the internet more securely.

Through their UXFund grant, the Guardian project focused on improving the core efficiency and reliability of Tor running as a service within the Orbot app. Since receiving feedback and learning about the confusion existing users were experiencing on the “VPN” feature of Orbot, they worked to redesign the setup, configuration, and text used to introduce and describe the feature.

The Guardian Project worked with Okthanks to complete user stories and host listening groups with end-users via encrypted conference calls. The Orbot listening groups were created to provide a space for users to connect with designers and developers and inform them of their needs and concerns as users. The Guardian team selected users in countries where censorship or surveillance are a reality to participate in these calls and will be using the feedback to adapt Orbot to be more useful to these groups.These listening groups, along with Guardian’s market research, have helped inform the user stories.

Based on the listening group findings, the design team created a new, “mini,” redesign of the Orbot app. After creating an interactive prototype, the team released the beta version of the orbotmini app, which is currently only 4.77 MB (eventually will be 3MB). 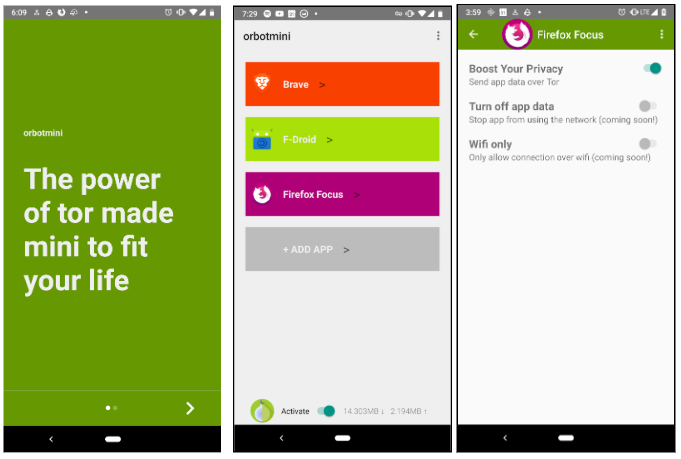