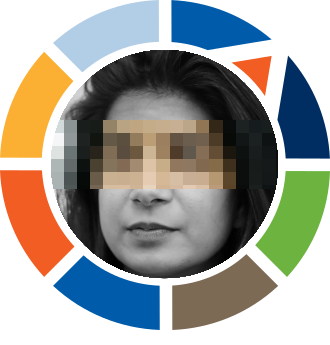 Bank Clerk and LGBT Activist
"If not me, then who? If not now, then when?"

Tabassum identifies as a lesbian and has recently become an active voice for the rights of the LGBT community in Bangladesh. During the day, she works as a clerk at a local bank. She volunteers at an unregistered LGBT rights organization. She also works with other activist groups for local and international advocacy. She is out to a few of her friends, but not to her colleagues or family.

In order to conduct meetings with other LGBT activists and the community, Tabassum needs to rely heavily on messaging applications like Facebook Messenger and WhatsApp. She also uses her personal email regularly to communicate with ally organizations.

Tabassum warnts to advance the LGBT rights movement in Bangladesh by repealing Section 377.

She also wants to raise awareness and implement sensitization programs designed to create an accepting and inclusive society.

Homosexuality is illegal in Bangladesh and LGBT activists can be arrested by authorities according to Section 377 of the law.

There have been reports that activists are under digital surveillance from both the government and religious militant groups. These activists are being tracked through social media.

Tabassum has a strong peer activist network for support.

She knows which communication tools use encryption and which do not.

She always meets other activists in public places or a secure home.

How do I know if I am under surveillance?

How can I stop information from being leaked to other people?